As it was mentioned before, Alocasias and Colocasias belong to the same family. This is why people also believe that they are basically the same. Well, they aren’t. Each type has its own species, and each of them has its own requirements, physical signatures, and such thing alike. For instance, Alocasia Macrorrhiza and Alocasia Odora are two completely different species. Alocasia Macrorrhiza has big leaves with light green color and fuzzy texture, while Alocasia Odora is smaller, having dark green leaves and smooth texture. Don’t forget that each species requires different treatments and care, so it’s crucial that you understand the detail of the species you want to grow at home. Make sure to perform careful research for each detailed species so you know the best way to deal with them.

Many people believe that elephant ear loves a lot of water because they are tropical plants native to tropical areas. In reality, they don’t need that much water although some varieties are able to survive standing water. In general, Alocasia elephant ear plant needs just enough water – not too much and not too little. Too much water can lead to root rot, while too little water would lead to dryness. It likes moist soil, not soggy or even wet.

The plant also loves warm areas, which means that the temperature and the soil should be warm. If you live in colder areas, make sure that you can provide enough warmth for the plant. Picking up the right spot to grow the plant is also important. You want it to get bright sunlight, but it should be indirect. It is able to tolerate direct morning sun, but the plant can only tolerate it for several hours before it gets too much. Afterward, it prefers shady or partial sun so it won’t scorch the plant and make it suffer from ‘sunburn’. 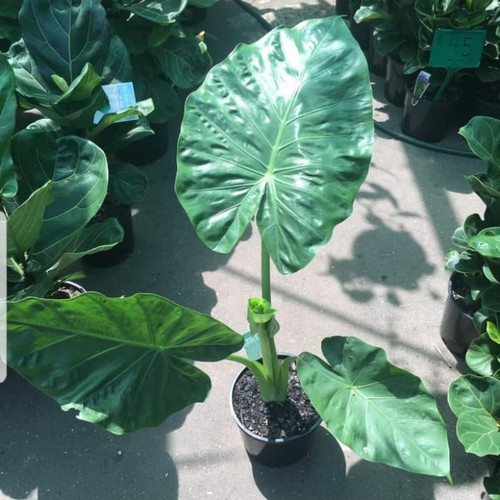 You should also pay attention to the proper arrangement and layout, especially if you are going to grow the elephant ear with other plants. Make sure that you provide enough space for your elephant ear because it needs enough room. Also makes sure that the temperature is warm enough, between 65 degrees and 75 degrees Fahrenheit. Some people say that the plant is still able to tolerate up to 80 degrees Fahrenheit. Follow these directions and proper care methods if you want your Alocasia elephant ear plant to thrive and survive.